I'll post more later, but here's an interesting story about the name of the Pud comic strip. It was posted in response to this blog post, which questioned the reason Steve used the name:

As a kid, Steve loved the Lionel Barrymore movie "On Borrowed Time". When he had a child named Ben, he started calling him "Pud" (Bobs Watson as John "Pud" Northrup), after the child in the film.

In the 1980s, he did an editorial cartoon about how children flock to advertisements. The editorial was illustrated in two panels, and received great response from readers and newspaper co-workers.

He decided to do up some more samples, which he showed the editor. The editor decided he could use extra content to fill up the space on the editorial page, and the strip's been going strong since.

At the time the strip started Fleer had stopped putting their "Fleer Funnies starring Pud" strip in the Dubble Bubble gum packages. He decided he could safely name the strip after this character, without confusion. Four years later, the comics in the gum packages restarted.

He says he's considered renaming the strip, and has a title that he's batted around in his mind (which he didn't reveal to us), but he's just never got around to it.

Posted by Visual Arts Brampton on Wednesday, May 23, 2007

VAB in "What's On" section of the Star

Let's hope this brings in the crowds.
Posted by Visual Arts Brampton on Thursday, May 17, 2007

As we have done other years, VAB is holding an exhibition of flower artwork at the Brampton City Hall atrium gallery. The exhibit will be open May 31, and go through June.

The exhibition will be on display until June 3 at the Art Gallery of Peel in the Peel Heritage Complex, 9 Wellington St. E.

Of the 66 artists selected for this year's Juried Show, 25 are from Peel: 10 from Brampton, three from Caledon and 12 from Mississauga.

Heather Appleby and Delroy Russell of Brampton were selected for the Jurors' Award sponsored by Colony Ford-Lincoln of Brampton, which they share with several other artists. Debra Ali of Brampton was revealed as the winner of the People's Choice Award at the opening.

For information about the Peel Heritage Complex, call 905-791-4055 or visit www.peelheritagecomplex.org.

Posted by Visual Arts Brampton on Wednesday, May 09, 2007

The Art Gallery of Peel's annual Juried Art Show had 254 artists entering work, of which 66 were accepted. Two hundred people came to the show opening, and 150 of them cast ballots for the People's Choice Award.

The winner? Debra Ali, one of our most recent new members.

According Peel Heritage Complex curator David Somers, via email, "Debra's work was far and away the most popular work with over half of the votes."

Debra's flower painting was a Christmas gift to her sister, that Debra has continued to work on months after the holidays, including during an event at Shoppers World.

As mentioned before, VAB member Mary Noble, lapsed member Kim Lee Kho and Kal Honey, and former VAB vice president Kate Taylor were all accepted into the show.
Posted by Visual Arts Brampton on Friday, May 04, 2007

Yes, that is our corridor on TV. 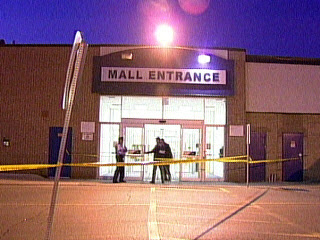 An argument started inside Shoppers World mall last night at 7:15 pm. Whether it was between either three or four males, and whether they were in their teens or 20s, you take your pick, the news reports have been thoroughly ambiguous. The fight soon spilled outside to the parking lot, and things got "louder and angrier", according to Citynews.

The corridor they went through to get to the parking lot? It was the Artway corridor.

As a result, Torontonians watching Global News Morning got to see Peel Regional Police wander past the Steve Nease Laughlines exhibit. People watching Citytv's Breakfast Television only got to see the doorway.
Posted by Visual Arts Brampton on Friday, May 04, 2007

Visual Arts Brampton
Brampton, Ontario, Canada
Visual Arts Brampton is a community art group offering a range of classes, workshops and exhibit spaces serving Brampton and the surrounding area since 1986. We can be reached at info@visualartsbrampton.com or 905-453-9142.